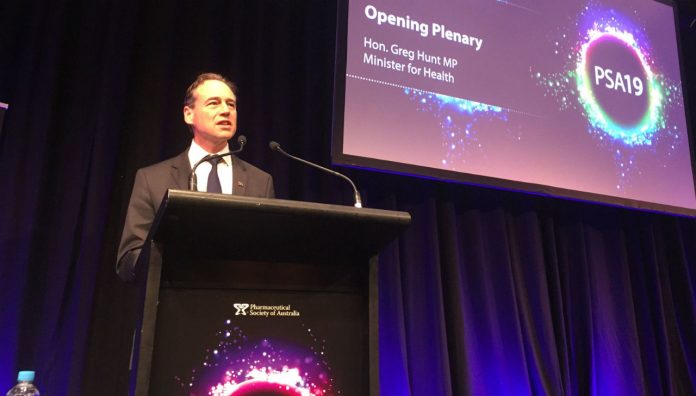 Medicine safety has been named a National Health Priority Area at PSA19 this morning, assuring greater focus for pharmacists’ roles in the quality and safe use of medicine.

Federal Health Minister Greg Hunt made the announcement as he opened the PSA national conference in Sydney.

‘I am delighted to announce and confirm today that the Australian Government will now move through the Council of Australian Government’s process to make the quality and safe use of medicines a National Health Priority,’ he said. ‘That work is underway and we will not stop until it is done.’

The National Health Priority Area initiative is a collaboration between Commonwealth, state and territory Governments aimed at focusing public attention and health policy on significant causes of the nation’s burden of disease, and creating holistic strategies to improve the situation.

Mr Hunt also used his opening address to announce that a national ePrescribing network is expected to be up and running by the end of the year.

‘ePrescribing is the final piece of the puzzle,’ he said. ‘That will be a very significant moment.’

‘The Commonwealth part is done. The railroad tracks have been laid,’ Mr Hunt said. ‘We now need the states to come on board and I am writing to all the state and territory ministers to urge them to get on board with this now.’

PSA19 is themed ‘Pharmacists in 2023: unlocking your opportunities’ and PSA National President Dr Chris Freeman said he remained resolute that every Australian has access to safe, quality, and effective healthcare through optimising the role of pharmacists in the Australian healthcare system.

‘This can only be achieved by embedding, equipping, and enabling pharmacists to be at the forefront of healthcare in Australia,’ he said.

‘This is about releasing the shackles of restrictive legislation, it is about investing in pharmacy and pharmacists and for the government to utilise the Pharmacists in 2023 report as a vision for the future.’

As part of the PSA19 opening, Canadian patient safety advocate Melissa Sheldrick gave a vivid demonstration of the importance of medicine safety by detailing how her eight-year-old son Andrew died after taking three times the lethal dose of baclofen after an error at a compounding pharmacy.

She has been the driving force behind the creation of Ontario’s Assurance and Improvement in Medication Safety (AIMS) program, which is focused on reporting errors and near misses with a focus on continuous improvement.

‘I’ve realised that (medicine) errors are not random. They are not statistical anomalies. They are common everyday occurrences that are harming people of all ages,’ Ms Sheldrick said.

‘These errors are avoidable and they are preventable and we must work harder to have regulations and policies in place that reduce their number, frequency and severity.

‘For me the bottom line is that if these regulations had been put in place, if there was a culture and practice in community pharmacy of reporting errors instead of shame and blame then maybe Andrew would be here today.’

‘Pharmacists have a huge and critical workload. Not only do you have prescriptions to fill, but you have patient consultations and doctors’ phone calls to make medications to look up paperwork to complete, teams to manage and the list goes on,’ she said.

Teams have to support each other and work together to examine why the incident occurred and to discuss how it can be rectified and prevented from recurring,’ Ms Sheldrick said.