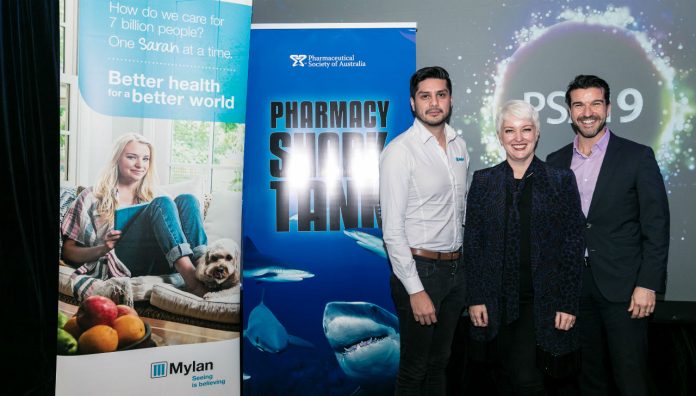 Patients would be able to seek pharmacist advice with a few taps on their smartphone, using a proposed app that has won the PSA19 Pharmacy Shark Tank innovation contest.

The Ask a Pharmacy app, the brainchild of pharmacist Shannon Lawrence, beat out two other contenders after impressing a panel of three judges at the event, which is supported by Mylan.

‘Over 90% of patients discharged from hospital have at least one medication-related problem – this could be due to incomplete or illegible hospital discharge summaries, changes to doses or medicines not being clearly defined,’ she said.

‘Pharmacists play a large and important role in solving these problems. We have traditionally been the most accessible of health professionals.

‘We provide information to people on their health and medication questions constantly, whether in the pharmacy or over the phone.’

The genesis of the Ask a Pharmacist app idea was based on the success of a blog Ms Lawrence started two years ago, aimed at using her training and experience to help people with health and medicine questions.

Since launching the blog, which reaches tens of thousands of readers each month, she began receiving many requests to address specific health enquiries.

‘Pharmacists are best placed to give people the right advice, not Dr Google,’ Ms Lawrence said.

‘My proposal to reduce medication-related problems is an app for people to use on their device to ask their questions of a pharmacist, like those that are asked of me through my blog, in the pharmacy or over the phone.

Ms Lawrence said she saw the app as a way of reducing medication errors while advancing pharmacy practice and the place of the pharmacist in the community at large.

The judges awarded Ms Lawrence’s app $6,000 for further development, praising the fact that she had already demonstrated an ability to engage with patients over their health concerns.

Meanwhile, a proposal to create mobile pharmacist vaccinators was awarded $3,000 by the judges, in support of the simplicity of her concept.

Conceived by Natalie D’Onofrio, the initiative aims to ensure rural locations or those with sole pharmacists are still able to benefit from the expansion of pharmacist immunisation services – even if there are staff or location constraints.

‘Imagine a mobile pharmacist vaccinator, similar to the concept of a traditional locum, ready to travel and available to provide immunisation services where they are needed most,’ she said.

Finally, a proposal from Brad Butt and Brooke Veasey from Cooleman Court Pharmacy to expand their successful Life Cardiac Clinic – a program aimed at supporting patients with cardiovascular disease after their first cardiovascular event – won the People’s Choice award, worth $1,000.