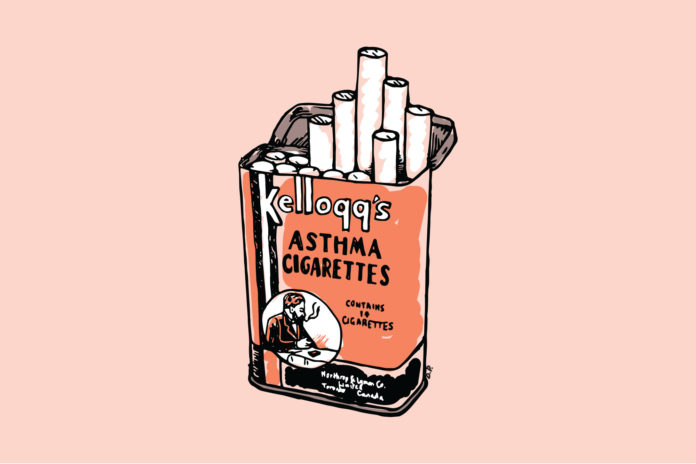 In this new regular series, AP is delving into the medicine catalogues of pharmacists of days past, to unearth often surprising remedies, like selling cigarettes for asthmatic children.

Long before Camels became the doctor’s cigarette of choice, asthmatics were being instructed to inhale smoke to relieve their symptoms.

Asthma cigarettes were: ‘agreeable to use, certain in their effects, harmless in their action [and] safely smoked by ladies and children’, according to a 1890s advertisement.

While encouraging an asthmatic to smoke today is unthinkable, these specially formulated asthma cigarettes were ‘universally recommended by the most eminent physicians’1 and persisted as the primary treatment for asthma until the 1950s.

The therapeutic use of smoke can be traced back to ancient Egyptian medicine which recommended inhaling smoke from burning certain plants in order to remove phlegm and ease breathing.2

The practice entered western pharmacopoeia in 1802 after a Scottish doctor visiting India reported that smoking traditional stramonium cigarettes had relieved his asthma.

Favourable reports of the remedy spread rapidly through the medical community and it was ripe for adoption in a society in which 80% of men and 40% of women were already smoking.4

Other recipes commonly included tobacco, potash, and even arsenic or cannabis.3

Pharmacists were instructed to ‘mince the leaves to a condition suitable to rolling in cigarette form, and moisten the mixture with cold saturated solution of potassium nitrate in water, dry thoroughly, and pack in airtight cans or jars’.5

This mixture was sufficient for two cigarettes of ‘ordinary size’ which pharmacists would often roll before mass-produced products hit the shelves.

Other common preparations included incense and powders which were smoked via a pipe or inhaler.

They were marketed not only for asthma, but also for chronic bronchitis, cholera, croup, whooping cough and hay fever.

In the early 1800s the perceived efficacy of asthma cigarettes was linked to antispasmodic and pain-relief properties as well as the production of ‘a grateful forgetfulness and a balmy oblivion like opiates’.4

We now know that solanaceae plants contain tropane alkaloids – such as scopolamine, hyoscyamine, and atropine – with strong anticholinergic properties.5

However, it also concluded that ‘although an asthma cigarette contains approximately 0.6 mg atropine-equivalent alkaloids, it is a crude preparation and, after smoking, the amount of active drug reaching the bronchial tree must be extremely variable and unpredictable.’

Additionally, the strength of toxins has been found to vary greatly (5:1) from plant to plant. The average datura seed contains about 0.1 mg of atropine and the approximate fatal dose for adults is >10 mg.5

Not surprisingly then, since ancient times, the inhalation of smoke from burning solanaceae plants has been linked to overdoses leading to hallucinations, palpitations and death.

Asthma cigarettes persisted as the primary treatment for asthma until well into the 20th century.

By this stage, asthma had come to be understood as an allergic inflammatory response that was irritated by smoke.

In the 1950s, the first modern inhaler was introduced – the pressurised metered-dose inhaler for administering adrenaline and isoprenaline. In the 1960s, these treatments were superseded by salbutamol and beclomethasone.7

Nonetheless asthma cigarettes were sold well into the 1980s, when they were ultimately phased out amid growing evidence of recreational abuse and overdose.6